“Sumps, are they the hidden cost to your operation?”

If you’re a miner and in particular an UG operator, you’d be familiar with sumps and the role they play. But many mines treat their sumps like a road side dunny, cursing the sight of them and neglecting to set periodic maintenance schedules for bogging (cleaning them). It’s understandable, I mean they’re not pretty to look at, and nobody got employee of the month for cleaning a sump.

But sumps in an UG dewatering system are as important as the pumps themselves.

The fundamentals of what a sump should do are simple; settle out solids for machine removal (bogging) & therefore distilling clean water for pumping.

Durand (1953) lead the investigation into the flow of solids in fluid over time, but the main parameters governing effective solids settling are driven by flow rates into the sump and the water:solids density ratio in the sump. 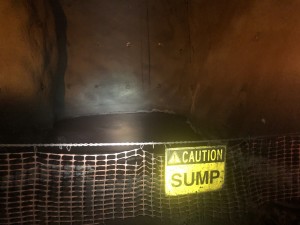 So good practical design inputs such as sump size, ease of bogger access, sump pump, location, and accessway are all key to an effective working sump, but it’s all in vain if you fail to bog (clean) regularly. If not bogged regular, then solids concentration builds up outside the realms of the sump design & the sump won’t be able to settle out effectively (as the water has less time in the sump to settle due to area being reduced). Ultimately – you’ll start pumping solids out of the sump and likely then into another sump or worse, the primary pumping system.

What does this mean for your mine…..? Additional wear and damage on pumps, pipes, valves, instruments, reduced dewatering performance, increased maintenance and power costs.

So next time you stop at a road side dunny remember to flush so the poor bugger behind you doesn’t need a bogger!